AN EASY WAY TO ORGANIZE KIDS CLOTHES THAT THEY HAVE OUTGROWN AND FREE PRINTABLES TO HELP YOU ORGANIZE YOUR OWN STASH.

When we found out Charlotte was  a girl, I kinda panicked inside. My first thought was, “Crap. She’s going to be just like me. SEND HALP.” My second thought was, “Crap. I really hate pink and all things girly.” Because of that, we got a LOT of gender neutral stuff (think mint, white, and you’ll never believe this but … gray.)

When our sweet boy entered our lives, luckily we were able to pull out a bunch of her old clothes and use for him. However, when I started down that, it just opened up a can of worms on this huge rabbit hole of organizing.

I had boxed up her clothes kinda in order, but a lot of stuff wasn’t. So, what else do you do at 9:30 on a Saturday night? Organize your child’s clothing they’ve outgrown!

So far this is what our girl has grown out of. I know, I know. that’s a proverbial crap ton o’ stuff. Wanna know the truth? About 65% of this we didn’t even buy; it was either given to us for free or bought for us.

Step one was pulling everything out of the boxes and putting them in piles arranged by size.

I really thought of whipping out my Silhouette and cutting some vinyl out for these boxes, but then I started thinking of all you fine people. Some of you may not have a Silhouette. Some of you also may have a Cricut which I know nothing about and I wanted to be an equal opportunity blogger. So, I decided to go the good old fashioned PDF route. I whipped these up and then got to sorting.

After getting them all arranged by size, I began putting them back in the boxes and stuck this bad boy right in front of the box.

This project was super quick and easy and I went ahead and made some for Josiah for when he starts to grow out of his newborn clothes.

So, if you need me in the meantime, I’ll  be in the corner crying about the fact that he won’t be wearing newborn clothes forever.

If you’re going to need to organize your kids clothes soon, pin this for later: 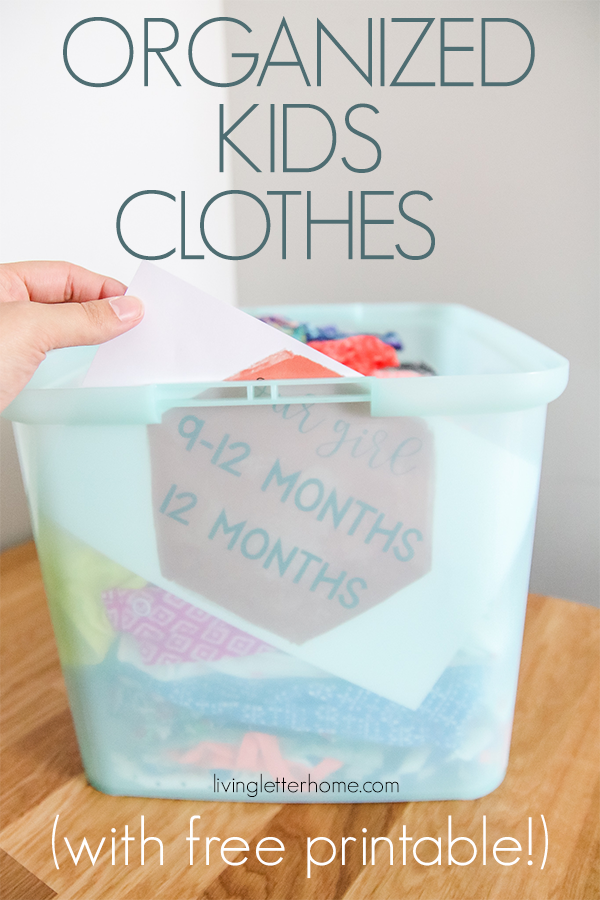 This is so smart! Here I’ve been using tape to on the side of all my boxes.

Let's be honest, I still pull out my label maker haha, but ya know, these are also cute I guess