Sherwin Williams Alabaster is a great netural color that is not white, but also not a cream. Come see this color showcased in our entire home and learn why it’s such a great neutral color that will work in any space

When we set out to create a whole home paint color palette, I knew one thing – I wanted neutral.

I’m not sure if you know this, though, but there are approximately 1950438920 JILLION neutral colors.

It’s precisely why I love certain lines of paint the most like Farrow and Ball and Magnolia Colors.

In fact, I even did a post where I compared Joanna Gaines paint colors matched to Behr paint and even that was overwhelming. And what do I do when I’m overhwhelmed?

Turn things over to the actual Joanna Gaines in this relationship – Jordan.

Aside from a few sentences of input, he actually picked our entire home paint color scheme and I gotta say, he nailed it.

But today specifically, we are going to talk about the very first color he picked out to be the “base” of everything else – Alabaster by Sherwin Williams.

Side bar, have you ever wondered what all those numbers mean when you see paint colors? It’s never made sense to me, but I’ve done a little research because I’m such a kind soul.

Hex Value: Another way of reading paint colors. The hex value is actually a mixture of the RGB values.

LRV: This number is probably the most important. LRV stands for Light Reflectance Value. It refers to how light or how dark a color will appear once painted on the wall based on how much light the color will reflect.

Get it now? Light reflectance value?

“Why is this important? You’re normally funny, Carmen. This is boring.”

I know, I know. Hear me out. I promise this will make sense and you’ll start looking at this from now on when you go and pick out paint colors.

The LRV will drastically change what your color looks like based on the amount of natural lighting your particular room gets.

If you want to fully nerd out, Kylie at Kylie M. Interiors did an entire post breaking down the LRV of paint and there’s no need for me to reinvent that wheel over here.

What color is Sherwin Williams Alabaster?

Sherwin Williams Alabaster has an LRV of 82. This means this is a light (off white) color. And if you have a super well lit room, it will be very light and bright.

This is an excellent color choice for you because it works in rooms where there isn’t a lot of natural light.

Not to mention, Sherwin Williams Alabaster white was the color of the year in 2016 and is still one of the best selling white paint colors 4 years later. Holla.

Alabaster is what I would consider a warm white; it’s way more brown in its undertones than blue. It’s not a cool color at all. But in regards to its undertones, they are very subtle. It has never once looked or felt brown to me.

When Jordan first told me that he wanted white walls, I thought he was crazy, especially knowing that we wanted a lot more kids.

However, seeing the wall in our spaces, especially in the ones that get a lot of natural light, I love it more and more.

Enough chatting, let’s see this color in our house! Consider this a mini home tour, I suppose. I didn’t get the house all dolled up for you though.

You can tell in our living room that this is a white with warm tones, but it’s not extremely white. Our trim and ceilings are Sherwin Williams Extra White and it is a very cool white. It’s noticeably different white, but they do not look bad paired together.

Oh, and PS. Not that it matters, but we finally got rid of that rug. We’ll be putting hardwoods in here once we knock down a couple more walls and get a couple more stacks of hundred dollar bills.

In our kitchen, we painted our cabinets to have grey lowers and the white uppers that you see is the Sherwin Williams Extra White again that is the same as our trim color.

It’s very obvious in our kitchen that SW Extra White is a very cool white, while Sherwin Williams Alabaster is definitely a warmer shade of white. For us, Alabaster does not look yellow, even in rooms with low natural lighting.

Our laundry room that got a glow up last fall is painted with Sherwin Williams Alabaster.

I really think this room shows Alabaster in its “warmest” shade for us because this room only has one window as its natural light source.

You can tell it’s a bit more brown here, but again, I want to reiterate that I love this color because it’s not yellow.

Our entryway gets a lot of natural light from the 2 huge windows in our living room, so it looks pretty white here, but in person, it really is more of a soft, incredibly neutral white.

Here is a room that I hardly EVER show. Our daughter’s room. You can tell this is a before because of the old floors. We’ve since had those bad boys replaced with gorgeous 9″ unfinished oak floors and they look more like this now:

We hadn’t fully put her room back together obviously and they weren’t even refinished here.

And before you judge me, this is a photo from our “scary house tour” aka what our house really looks like 9 times out of 10.

Regardless, this is her room painted Sherwin Williams Alabaster. The navy accent wall is Sherwin Williams Naval which has also been a color of the year and it’s gorgeous. I wish I had the nerve to put it other places in our house.

Also, isn’t it crazy how the same color can look completely different in the same room depending on lighting? The sun sets in the front of our house so her room is entirely brighter in the afternoon (messy bottom picture) than it is during the morning (neat and tidy top picture).

How does Sherwin Williams Alabaster compare to other popular paint colors?

SW Shoji White has an LRV of 74 which means it’s going to be a darker color than Sherwin Williams Alabaster. Shoji White has more of a brown undertone which almost looks like a super light greige.

Since we knew we were going to have Agreeable Gray (which is technically a greige) in a lot of our rooms as well, having 2 tones of greige just didn’t vibe well.

I’m a little confused as to why Sherwin Williams Alabaster gets lumped into categories with colors that are clearly greige. I can only assume it’s because of its brown undertones, but to me, these colors couldn’t be farther from one another.

Okay, they could totally be farther from one another, but still when it comes to neutral white paint colors especially, I would never consider Sherwin Williams Accessible Beige to be white.

The name of the color is in the name – Accessible Beige.

In fact, the LRV of Greek Villa is just 2 higher than Alabaster at 84.

Plus, if I’m being honest, I can’t type out BM without thinking of poop cuz I’m a child.

But if you are looking to a color by Benjamin Moore that is similar to Sherwin Williams Alabaster, your choice is going to be Benjamin Moore White Dove. It’s a little bit lighter with an LRV of 85.38, but it’s beautiful in person.

Absolutely it does. We have grey alll up in our house and even have a part of our stairwell where Sherwin Williams Alabaster is on one wall and it butts up to Agreeable Gray on the corner wall.

It’s hard to tell, but the wall to the right is Agreeable Gray and the wall directly forward is Sherwin Williams Alabaster.

If you’re wondering why we chose to do that it’s because although there is a door leading out to our back porch, our entire kitchen is that Alabaster white and the ceiling connects off to the left.

That sentence makes no sense to you, but you can kind of see it in this picture. See how above the door is continued into the stairwell? It would have looked weird if we would have just cut it off before the door.

Even though we painted our kitchen cabinets Sherwin Williams Extra White, I think if you wanted to use a softer white, Alabaster would be a great option.

This color almost snuck up in our master bedroom too, but I was feeling froggy and decided to try a “color” and we went with Sea Salt instead.

From trim and doors to kitchen cabinets, if you’re wanting a soft white, Sherwin Williams Alabaster is going to be a great option for you. It will provide the “white” you want that also works great on shiplap, but it won’t feel like “sterile hospital” white!

How do you guys feel about SW Alabaster? Did we make the right choice?

In case you need this for later: 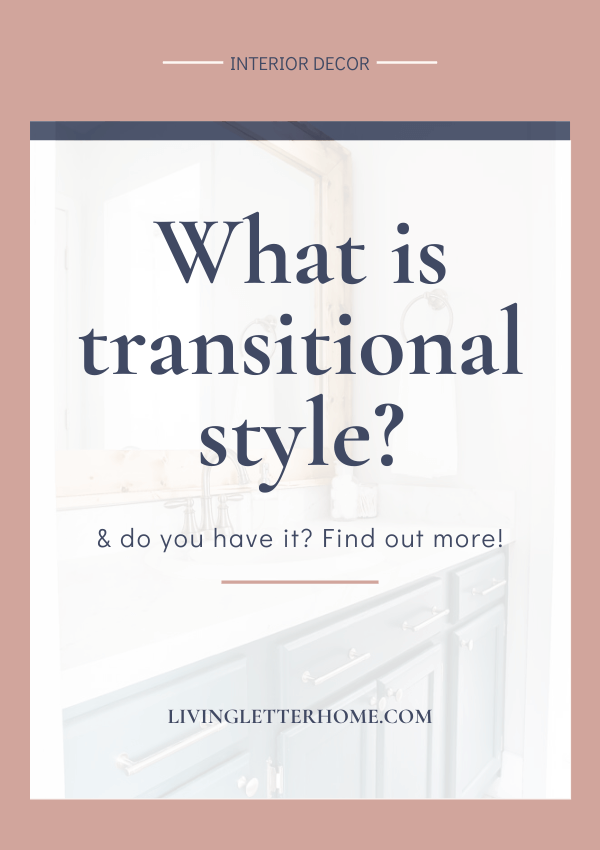 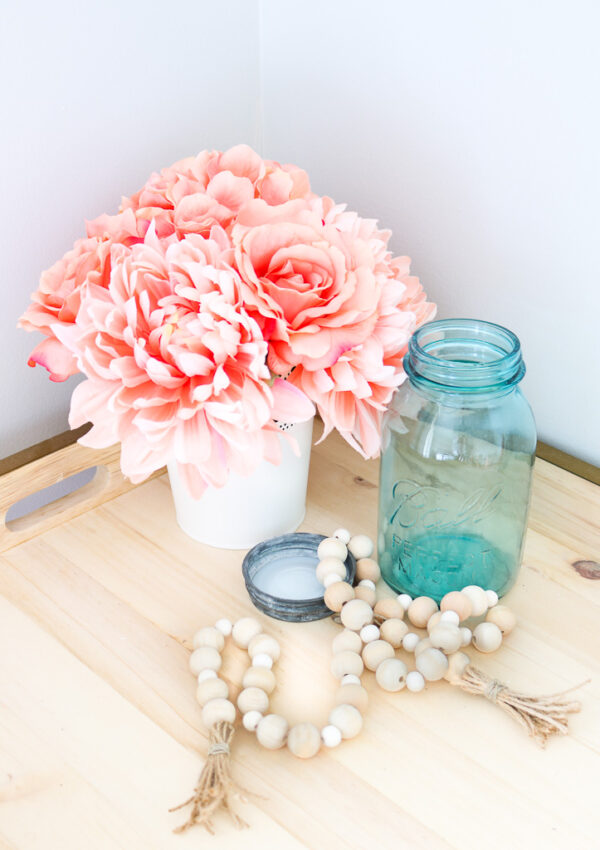 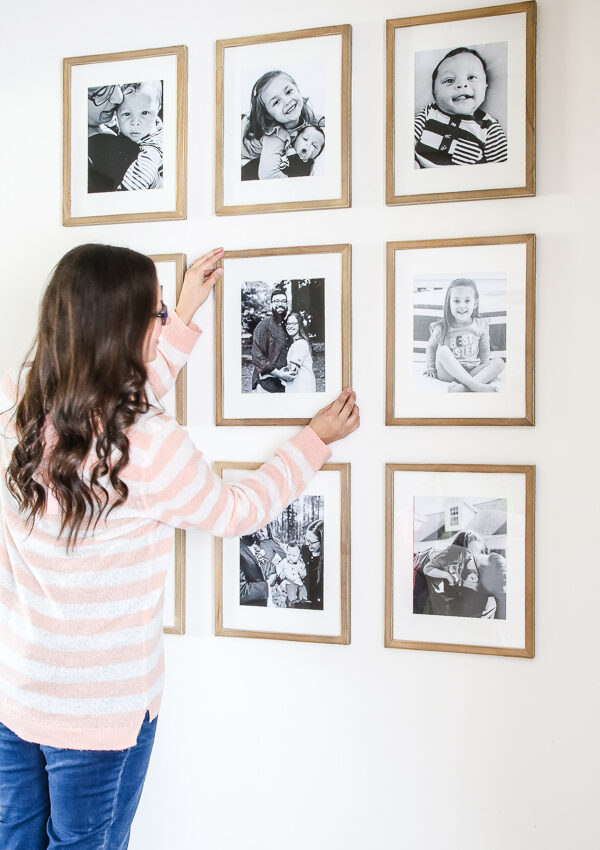 How To Add Craftsman Style Trim

LOOK AT MY (Christmas) BALLS! Jk. Okay so I can’

Yesterday was a big day (for me at least) ⁣ ⁣

I know, I know. Another gift guide 🙄 BUT these

Well, I did it. Decorated something for Christmas.

So much math. Like a lot of math. An annoying amou